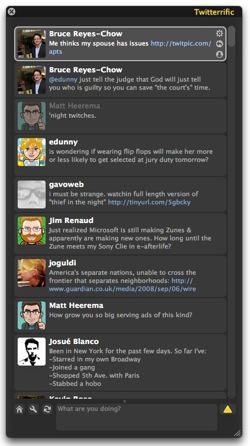 I thought Twitter was pointless. I started using Twitter in April of 2007 and after about a week or two, I deleted my account because I thought it was lame. “Why does anyone CARE about every little update from my day…?” I didn’t really see the point of it, and so I quit.

For those of you who may have no idea what Twitter is, basically it’s social networking web application that allows you to send out very small (140 characters) snippets of information into the vast World Wide Web. People might post updates throughout their day (much like the Facebook Status Updates) or they might post links to helpful articles, funny YouTube clips or other things. Some folks refer to it as a form of micro-blogging.

So, a year after I first tried it – I decided to give it another whirl – a fresh start. And I began Twittering again. It’s been about four months since I started for the second time, and it’s been a completely different experience. And I think that’s primarily because of one reason: the WAY in which I was using Twitter. When I first started, I was just using it as a way to update my Facebook Status Update – so, it really felt like I was just letting all of cyberspace know that I was having a problem with designing a website, or that Sarah and I were going to the dog park, or that I was having a crappy day. And I had to ask myself, “Really? Does anyone care…?” And it didn’t seem that anyone did, so I quit.

But really, it was all about how I was using Twitter. Using an application like Twitterific (which is pictured above) is a really helpful way to utilize the capabilities of Twitter.  You have the option to “follow” someone on Twitter and then you can see their Tweets when they post to Twitter. When I first tried Twitter, I wasn’t following anyone, and I don’t think many were following me. So, I really was just sending out those updates into cyberspace. However, the second time around, I started “following” lots of people, and found out that there were a lot of folks who wanted to “follow” me (currently I have 221 followers and I’m following 84 people). So, in a sense, that is my “Twitter community.” They are people who I know from a variety of places and networks, and in many ways, they’re people who are available to me almost instantaneously.

When I gave Twitter a second try, I realized the incredible resource it can be – from questions about what airport to take, to HTML/CSS issues I run across when I’m designing websites, to what movie we should rent…when I post a question on Twitter, I’m almost guaranteed a response back from someone within a minute. So, I have an incredible amount of people available as resources at any time of the day – and they don’t have to take the time to sit down and write out an email, when you can generally say what you need to in 140 characters. Also – it helps me connect with folks easier than I can on Facebook. I only catch the 3 most recent Status Updates on Facebook and they might be from people who are more my Acquaintance/Friends on Facebook and not much more than that (I am thinking through a post on how Facebook is changing the nature of “friend”ship…but that will come later). So, out of my 1293 “Friends” on Facebook, there are about 84 who I follow more closely on Twitter.

Clive Thompson, a writer on science and technology, wrote a great article on Twitter: “On How Twitter Creates a Social Sixth Sense.” He believes that if you look at Twitter in a very narrow way, and just think (like I did initially), “Why does anyone care about all of these little, mundane updates…” then it will seem like a total waste of time. However, what Twitter does is lets you into the life of your friends/co-workers/family in a way that is unlike any other. You hear about the little things, the day-to-day elements of their lives that you would generally miss out on – and all of that adds up to knowing your friends in a “different” way – a social sixth sense – another layer deeper into their lives.

So – do you get it? Does this blog post make you want to start Twittering? Probably not. And I still haven’t been able to convince Sarah that she should start (though she likes the idea of being able to send me Direct Messages through Twitter instead of using up our Text Messages). But it’s because Twitter is something you just have to DO. Thompson says the same thing in his article:

So why has Twitter been so misunderstood? Because it’s experiential. Scrolling through random Twitter messages can’t explain the appeal. You have to do it — and, more important, do it with friends.

You just have to try it out – experience it. And you need to find your friends on Twitter and “follow” them. It can feel kind of pointless if you try to do it in a vacuum. You need the friends and Twitter community to really get the most out of it. I generally tell people they should just try it out for a month. Or even just a week. Try it out – give it a whirl and see what happens. Sign up here.